An examination of debt and poverty amongst 1900+ users of financial counselling service. Published October 2019

This report describes the demographics and nature of debt for all clients who accessed our Financial Counselling and Capabilities (FCC) services in the 2017-18 financial year. There was a total of 1983 clients seen during this period.

To add depth to the findings, a qualitative survey was conducted with FCC counsellors, seven of whom responded between March and April 2019. Counsellors were asked to respond based on their clients during the previous 12 months.

Just over a quarter of clients were aged 46-55 years old. Clients were predominantly women (62% female vs 38% male), 67% did not have concession cards, 25% pension, 8% low income health care cards, 40% were employed or self-employed and 41% not in the workforce (including stay at home parents and clients not actively looking for work). 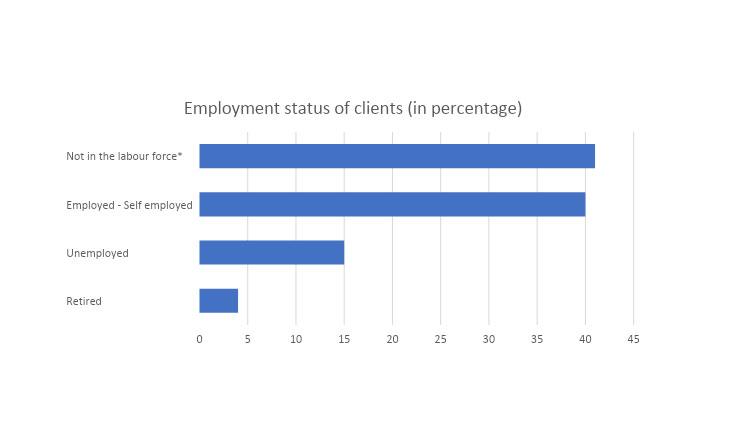 *Not in the labour force means clients not actively looking for work such as stay at home parents.

Mental illness was ranked as the most common contributing factor to financial problems by the FCC counsellors. All counsellors identified that their clients had at some point, expressed signs of suicidal ideation. Of the clients who disclosed they had a disability 50% reported a psychiatric or mental health condition. Gender and the Feminisation of Poverty

Unemployment and low income were ranked by counsellors as the second and third most common contributing factors to financial hardship respectively. Increasing cost of living, in the world’s 5th most unaffordable housing market (Dosen et al. 2018), combined with increasing numbers of people in insecure employment arrangements – including casual work and short-term contracts – have likely contributed to FCC counsellors reporting that an increasing cohort of clients are stuck in insecure or inadequate employment.

Going without food or heating and borrowing and lending to cover expenses are some of the strategies being used by individuals and families to cope (The Brotherhood of Saint Laurence 2018). This does not enable financial stability or resilience and further entrenches people into poverty and financial hardship.

The need to pay for essential living expenses combined with perceived unsuitability for more traditional forms of credit, can drive people living in poverty to sign for loans with exorbitant interest rates from unethical payday lenders.

According to Ali et al. (2015), problematic forms of credit such as payday lending has grown considerably since the Global Financial Crisis to pay for everyday expenses such as household bills, utilities and food to supplement insufficient income or benefit payments. All the FCC counsellors surveyed for this report believed that their clients would have used a payday lender at some point in the previous 12 months.

A fifth of the clients that accessed Better Place FCC services in the 2017-18 financial year were culturally and linguistically diverse. Research shows a link between being from a non-English speaking country and financial vulnerability. Limited English language proficiency adds to the challenge of navigating lending and banking systems and in times of crisis can become compounded by feelings of shame and fear. Delivering services to culturally diverse communities requires consideration of these additional complexities and building the capacity of local services that are best placed to respond effectively to cultural challenges.

Most of the FCC counsellors agreed that banks (post new legislation) and utility providers were more agreeable to making payment plans for clients than telcos and debt collectors who were considered the least agreeable. This speaks to the need for revised legal frameworks that protect vulnerable populations from exploitation by lenders.

The role of Financial Counselling Services

To help clients navigate these challenges FCC counsellors reported that the most common referral to support services was to legal advice (71%), this makes sense for clients who likely have creditors and need legal advice and protection. In addition, mental health counselling, housing services, employment services and Centrelink, and emergency relief were equally common with 43% of responses each. Counsellors reported referrals to a wide range of support services, reflecting the diversity of people’s experiences and the complexity of financial hardship.

This paper describes the demographics and nature of debt for all clients who accessed our FCC services during the year between July 2017 and June 2018. There was a total of 1983 clients seen during this period. The average number of sessions per client was 2.3, and the waiting time for their first appointment was 18 days. Most clients received the required assistance in a short period of time and their problems were resolved satisfactorily. Since the 2015 – 2016 financial year, the number of clients accessing the FCC service has more than doubled. The Centre for Better Relationships

Better Place Australia acknowledges the Traditional Custodians and their Elders in each of the communities where we work.